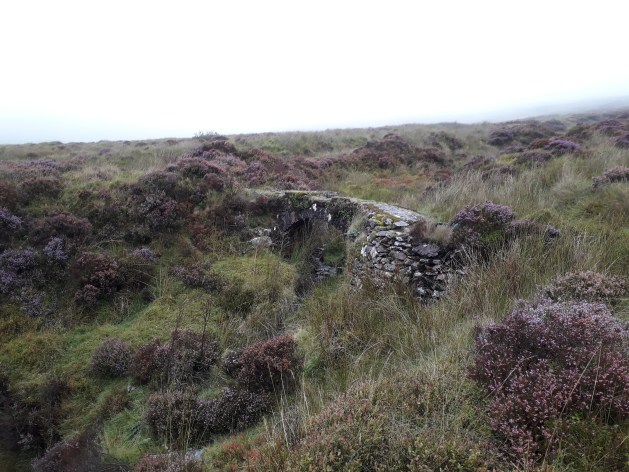 More bad-weather navigation practice!    Six members gathered at Mount Melleray Abbey at 10.30am in murky weather for the planned trek.  The poor weather forecast had caused cancellation of a silage demo at the Abbey but a few farmers had arrived and one CMC walker promised to meet them at the “Ploughing” next week … perhaps a good prospect of road frontage?    Low cloud and drizzle followed us through the woods then we broke free of the trees, crossing a newly cut firebreak and ascending over short heather with occasional low marker stones created by scouting groups.  It began to rain steadily and a SW tailwind accompanied us as we were immersed in the cloud layer. Shortly after noon we reached the summit tableland at 650 metres but by now we were propelled by strong wind and driving rain so we crossed the plateau to the northern side in search of very marginal shelter in peat tussocks. Stopping for a quick “one sandwich” lunch we were all pretty wet and the leader was deaf to mutterings of turning back.

Resuming the walk and using the handy cairn at NW edge of the plateau we descended roughly northwest into the driving rain and low cloud following a line of small cairns that lead down to the pass between Knocknafallia and the unseen Knocknagauve.  This side of the mountain is softened by long grassy tussocks making descent easy and after a time we came on the long earthbank that warns of the approaching Bottleneck Pass.  Crossing the earthbank we descended further but now swung southwest into the wind and rain on a compass bearing over rougher ground but unable to see anything but our immediate surroundings. This part of the walk was a plod into the unknown with the consolation that we were steadily descending and would eventually emerge from the murk.  A brightening coincided with easing of the rain and before us we could identify the low hill of Dyrick and the ravines that would merge above the feeder lavada canal for Melleray.  Bridging a stream by an abandoned aqueduct we searched further downstream and found the source and inlet grid of the canal. The rain had stopped; we stopped as well and sat down to a second lunch and the water-music of a stream in spate.   Our return journey followed the track beside the canal that appeared to almost flow uphill at one point and later crossed by a small aqueduct before entering the treeline and reaching a forest road. Here we swung left and soon rejoined the morning’s route back to the Abbey grounds.   Changed into drier clothes we retired to the Abbey coffee shop for scones and refreshment.  A walk memorable in retrospect.